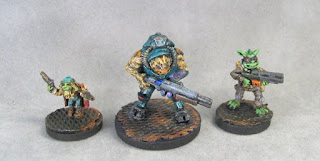 More Minismith Roulette so soon after the last time? Well let's roll for it- 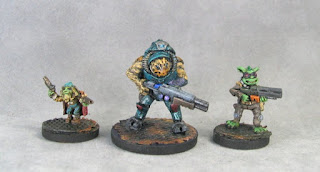 Again, I sadly lost the pics of everything in that cell, but these three guys got pulled- two Rogue Stars figs and a lil' guy from Freebooter Miniatures. It was a 3 for the Odd side, a 6 for the sixth row down, and a 3 for the third cell over. 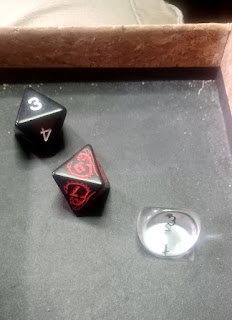 This little pirate guy (I started calling him "Danii Blasters" as his pirate name because it just fits) from Freebooter reminded me of the little pet guys from the Colony 87 line of minis. So I painted him like I had painted those little guys wth bright green skin. He's one of these 'pets' who has escaped and joined some space pirates. 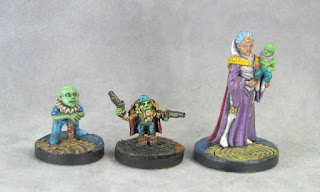 Next is this Rogue Stars figure who's a little guy with a big blaster- I've taken to calling him "Grinkus" because that's his name now. I wanted something different than a brown fuzzy guy so I went with green.

Finally is this turtle guy from Rogue Stars. He was pretty straightforward and I really like how he looks. He's been named "Turt" after a little plastic toy turtle I had when I was kid (there was a big one and a little one, they were of course named "Turt" and "Ull" because I was very imaginative).

Here's a couple of lineups to show how big these guys are. Above we've got our trio with a Victoria Miniatures Trooper and a Raging Heroes Jailbird. Below they're with a GW Primaris Marine and a Monkey Miniatures guy.