A Few Jailbirds (Toughest Girls of the Galaxy) 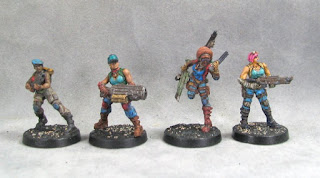 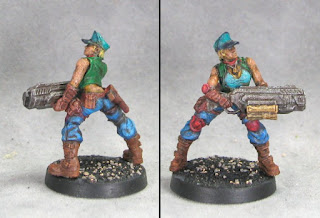 First is this heavy weapon chick (aka "Widestance"). She's got a very odd pose because when I built her I got called away after gluing the torso to the legs and it slipped a little and the bond was impossibnle to break to reset her- so I left it and gave her this big weapon to make her look a little more natural (it's a really HEAVY weapon). 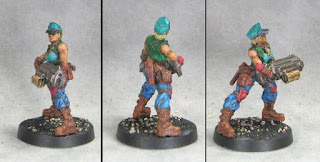 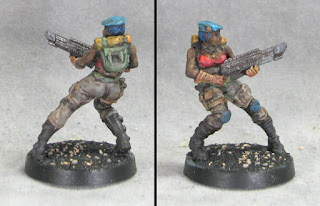 Next is this rather normal trooper. Her hair is blue but it's a pretty dark blue. Also you can barely tell that the top tip of the rifle barrel was damaged during cleaning. I managed to fix it with some UV resin. 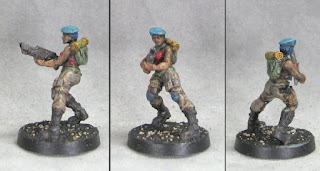 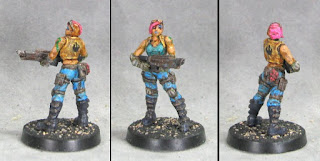 This was the first of these four Jailbirds to be finished (over a month ago). She got a little more attention than the others and it shows. I freehanded the vaguely Rebel Alliance symbol on the back of her vest because I wanted to do something with that blank area. I really like how her neon pink hair came out. 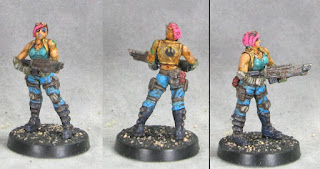 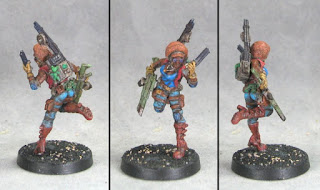 Finally, the radio operator chick. I opted for the afro head because it's just so good (I think the helmeted head got used on a Victoria Miniatures trooper a long time ago). I love the pose and I think the paintjob came out okay. The hair came out better than I had hoped. 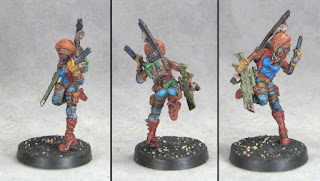 Here's a group shot with the first completed Jailbird (a picture of her waaaay back in 2015). They're supposed to be rag-tag fighters and I think they look the part while still fitting together pretty well.

I keep debating if I should get a box of the plastic Necromunda Escher chicks but then realize these Jailbirds are basically the same thing without the spiky hair. Plus I've already got these figures (not to mention the Lust Elves and the big werewolf chicks and the not-Sisters of Battle). So, of course, I just picked up the newest Necromunda starter box with the plastic Eschers and Delaque, eventually there will be some comparison shots and likely some bits-swapping between the two lines...