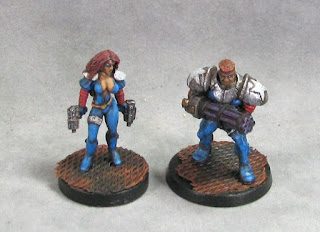 These minis come from a long time ago (2000? maybe earlier or later a bit) and have been languishing in a box waiting for their time to be painted up around the 4th of July for maybe 20 years. This time I managed to remember about them and get them finished. They're probably somewhat inspired by some Rob Liefeld comics but they're not bad minis. I didn't want to give them my normal urban asphalt style basing so I snipped off their tabs and put them on the industrial grating made from UV resin. I love to build up the rusty bits on these types of bases. 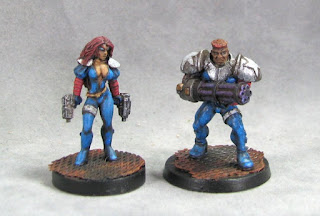 The Male Patriot is a hulking guy who's also clearly a cyborg (he's got cables from his big gun connected into his side). I couldn't decide if his armor should be white with blue stars or to go with silver armor and white stars until I remembered the old Erik Larson character Superpatriot and that sort of lent some inspiration to the silver with white stars. 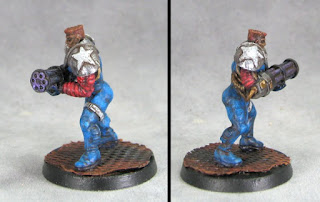 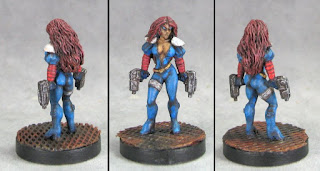 The Female Patriot is probably also a cyborg, but maybe she's just really good. It was nice to paint these both in the same basic colors since I don't usually make minis match too closely. This blue bodysuit with the red sleeves came out pretty well. I almost gave her a star on the left shoulderpad but decided against it because I didn't want to mess it up. 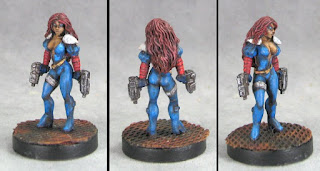 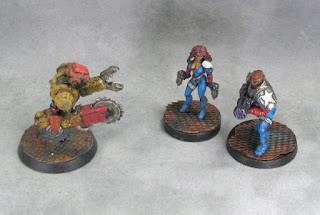 Here are the Patriots facing off against a Killbot. 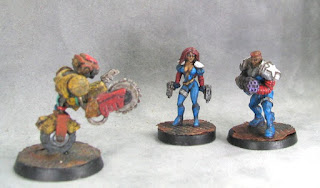 And here the Patriots are surrounded by some Dark Eldar...

DISCLAIMER- I am in no way whatsoever endorsing the New England Patriots with these miniatures, they have nothing to do with that team at all.