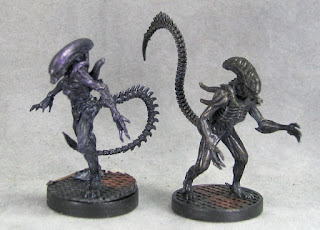 I backed the Aliens vs Predator Kickstarter from Prodos games back in the 'teens sometime. The fulfillment was slow and I took advantage of their offer to pick up the main box at GenCon instead of waiting for them to actually ship it. The minis were fiddly but nice resin. I sold off the human figures because I've got 28mm human minis out the wazoo. There were still parts of the Kickstarter I was supposed to get from them but they were delayed despite Prodos doing a second edition of the game and changing the resin figures from multi-part to 'unicast'. I avoided getting any of these admittedly pretty cool versions of the minis because I didn't want to reward them for ignoring the Kickstarter backers. Eventually Prodos lost the license and finally fulfilled the last bits. Gale Force Nine then got the license and has recently released some hard plastic Alien figures separate frin their game, I just got a box of these. I've kept a few of the resin figures from Prodos and now is the time for them to be assembled and join their hard plastic brethren.. (the one on the left is from Prodos) 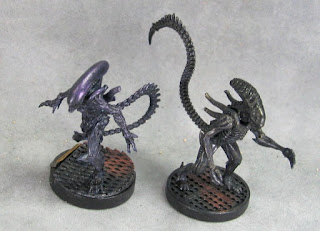 This is the Prodos figure. I originally had it on a 30mm base with my lame attempt to do an Alien Hive texture. It wasn't great. Since the GF9 bases are 25mm I decided I could put these similarly sized Aliens on some of the great UV resin textures I've made for industrial/sci-fi basing. I think it looks good. The colors used for this one were black and dark blue for the base coats with some light purple and grey drybrush then a black wash followed by a blue/purple metallic color shifting drybrush.

The hard plastic from Gale Force Nine is pretty easy to work with, but I'm not as happy with the fact that most of the poses have the feet molded onto the bases. It's not a big deal and I've only put together one of them, so I might change my mind about that minor drawback. This guy went together pretty easily (i didn't follow the directions so his spine is a little out of alignment- don't look at it!). This one started out with the same colors as the Prodos version with the only difference being a black/gold color shifting metallic drybrush at the end. I think there are going to be many different colorations for the rest of my xenoorphs (I really want to do some red ones!). 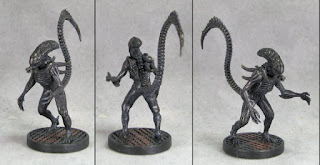 It's been a while since I've done any scale comparison lineups, so I thought this would be a good excuse to show both Alien designs with various other 28mm figures. From left to right: Monkey Miniatures, Prodos, unknown manufacturer, Gale Force Nine, GW.