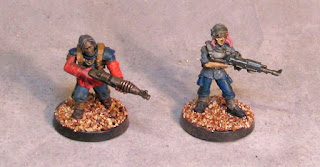 I've got a few sets of various Victoria Miniatures' figures that haven't been put together (some have but they haven't been fully painted except for a couple of the awesome Beastmen Guard) so I decided it's was time to battle that deficit. Thus, Olde Quinzell (a retired scout or something?) and Trooper Maria (not her real name, just something I came up with on the spot)...

With tons of bits from various sources, I decided to use this Toughest Girls of the Galaxy alternate head for one of the figures I had already put together to give some more variety to the Victoria Female Guard figure. This is the newer resin with multiple arm and weapon options. The other one I built at the same time has the AK-looking gun that I really love.

Olde Quinzell got a non-Victoria head (I think it was from Maxmini, on a sprue with some other "Rasta" heads) AND some GW Mechanicus arms. I trimmed off some of the parts of the rifle to make it something different. He was tossed together with a vague idea to use him as some sort of grizzled elite Veteran character.

I love scale comparison pictures because it helps me figure out about how big the minis are to something I might have or have at least seen up close in the past. With that in mind I decided to take some quick comparison shots with something other than GW Imperial Guard (plus I don't have any IG because I'm not a fan of those models).