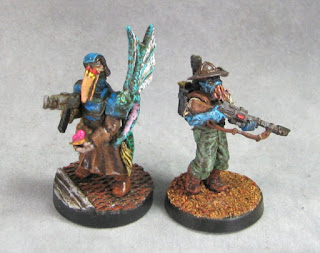 An interesting duo this time. A random conversion of a Wargames Factory Greatcoat Trooper into an alternate reality Scrolltraveller (aka Shefdu Sootootma) and a Victoria Miniatures Trooper with a Cthood head and some GW bits to give us a figure for "Calamari" from Quinzell's Raiders. 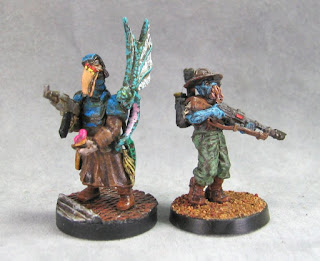 Looking at Calamari first, he came together on a whim from bits mostly from a Victoria Scrapper Bag bits (rejected random casts of bits they sell every now and then). His arms were the worst part with the right shoulder pad being horribly damaged and blurred into the folds of his sleeve. I gave him the tech-y backpack because Calamari is the best nonhuman hacker in known space. The helmet came from an old GW kit of belt gear and the feather was added to cover up where the pouch was removed. I love the Cthood heads and his pose came out just like I'd imagined. 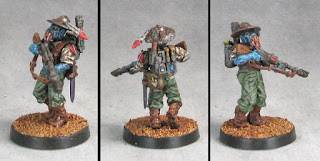 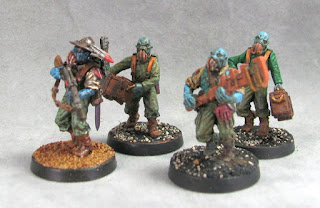 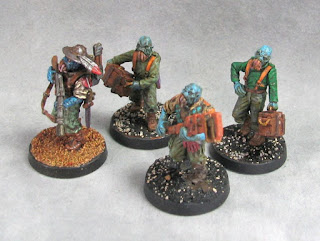 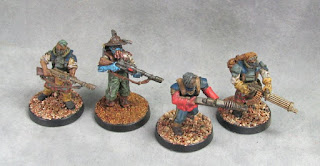 And here's Calamari with Olde Quinzell and a couple of Highland Troopers. 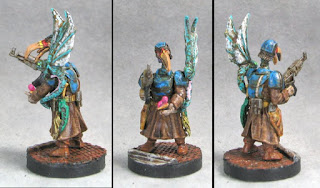 The tales of Shefdu's adventures travelling the scrolls are not widely known yet some of these exploits have become legendary. One such instance is the 'Scroll of Darkest Future of Grimness' that Shefdu managed to escape at the moment he was threatened by a warpstorm. But there are alternative scrolls of these events in the Library of Shifting Eventualities. In one such scroll young Shefdu is buffeted by the warpstorm and stuck for some time in that Darkest Future of Grimness. Thus this mini is a more grimdark version of the Scrolltraveller, armed and armored against the dangers inherent in travelling the scrolls. 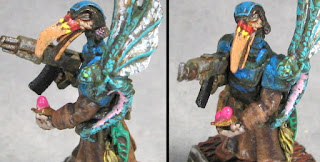 Grimdark Shefdu has a red cyber eye on the right that doesn't show up well in the pictures. His Tethru head is of course from Crocodile Games. The AK comes from Maxmini- I got a pack of these various resin AKs years ago but have been very stingy with them. Originally his left shoulder had a big feathery ornament thing that I never really liked. When I grabbed him to look at painting him up recently, I decided to try a trick I've seen some converters use to bend the plastic feathers a bit with some FIRE. It didn't work. So I snipped that mess off and carved one of the Wood Elf spites off of a banner bit because it would look pretty good sitting on Shefdu's shoulder- and skyfrogs are born! Finally, I knew I wanted to add some 3D effects with UV resin on his device. After the painting was done I carefully built up the resin to look like something (holographic comms? Topographic map? Chaos magiks from the warp?). A little pinkish neon paint on the device shows through with a little bit of highlighting on the resin itself. His base is also uv resin because I wanted him to get the rusty grating. 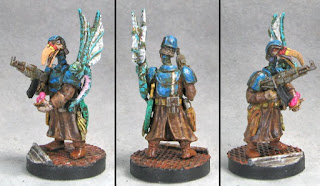 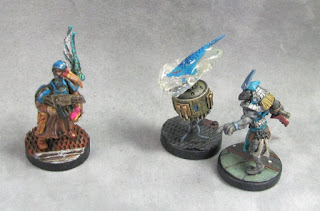 Here Grimdark Shefdu realizes he's being double crossed by 'The Fish' and associate. 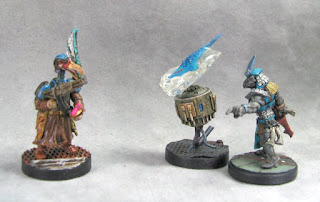 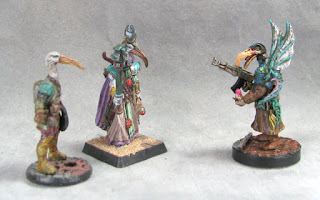 'Crisis of Infinite Shefdus' is now something that needs to become a reality. I can see Cyber Shefdu, Barbarian Shefdu, Steampunk Shefdu, and many other possibilities... 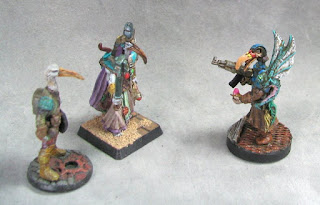