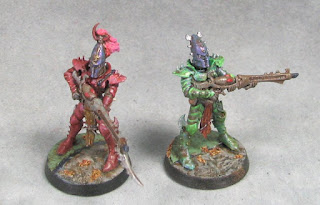 I don't play 40k and I don't often go in for "army" building, so these modern dark Eldar were put together for fun with the goal of looking cool. There are certain conventions I'll try to follow throughout a line of minis like this. These two were mainly tests of some techniques and colors to see what I liked. I'm not disappointed in either of them. 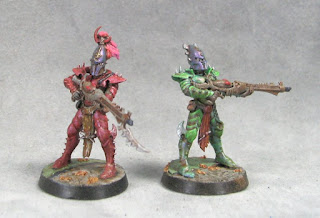 The red one was done with some color-shifting metallic paint because I thought that would come out pretty grimdark Eldar-y. Not bad.

The green one was an insane idea about using fluorescent green paint for the armor to look like some cool alien metal. I think it came out pretty good. Both of these guys' helmets were done with color-shifting blue metallic as the "squad color"

These old-time Dark Eldar plastics were actually painted with a darker theme back around the turn of the century. They don't look great and would benefit with a heavy touch up- but that probably isn't happening any time soon.

The olde figures do fit in okay with these newest two, but the new ones definitely have more fanciness on the sculpts and the paint jobs are a little better....