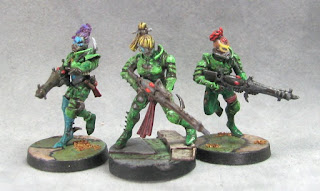 Three more Dark Eldar in the "battered radioactive waste" color scheme. This grouping has earned the name "Echoes of Transience" because it sounds kinda mysterious and goth-space-elvish. It probably has something to do with souls lost in the webway becoming something else. 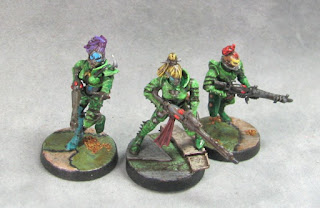 This first one is on a full fancy UV resin base topper of Eldarish ruins. When I found the design I liked for ruined Eldar bases I knew this one should have her feet on different levels to look more dynamic. Her hair isn't too fancy but I think it goes well with her grey skin.

This next one has a more human-like skin tone (I've come to give any and all Eldar skin tones from pure white to dark grey because they're supposed to not be human) with a stylized skull face paint on half his face. His base is simply a regular slotta base with some slightly raised areas of UV resin to mimic the ruined Eldar base above. 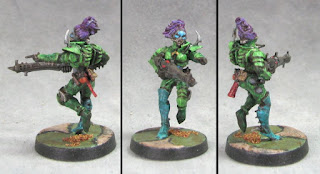 The last of this batch also sports a ramshakle UV-ed slotta base to fit in with this new basing scheme for Dark Eldar. Her purple hair is subtle as is the blue facepaint . She's also got some blue paint on her belly. I'm not sure what she's pointing at, but it's probably important to the scenario objectives. 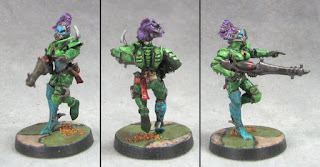 Here we have these three with the first one in the battered radioactive waste armor.

There are four others that have been assembled and partly painted, some not in the radioactive waste scheme, but I'm not a stickler when it comes to everyone matching on the same side. And different schemes makes for the option of multiple warbands with grudges that need to be settled...