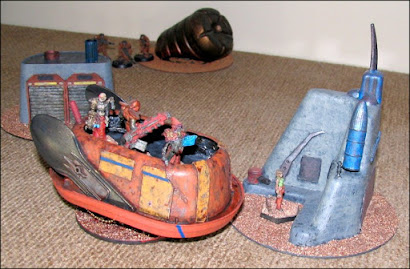 The 2020 Trash Bash Build contest, run by Brian Roe,  had a theme of food container and spoon to make something related to transport. I originally planned to make a transport pod inspired by the ones from Farscape because I had been keeping a rounded triangular chip tube for years,  just waiting to find the perfect thing to serve as the curved cockpit area. I was pleased when I realized the package for this overnight oats "Mush" seemed to fit the bill. When this build was announced I started looking for the triangular chip tube but soon realized it had been stupidly tossed several months back when I was sorting through my unused trash raw materials! Never toss anything you think you'll use for a build because most of time it'll be something they don't make anymore and your creative juices will be devastated.

After much soul searching, I finally decided to do some sort of techno-grimdarkish open-topped hover vehicle. It would be simple and a little junky and I'd use no miniatures-related plastic bits for it as penance for the Farscape transport debacle. 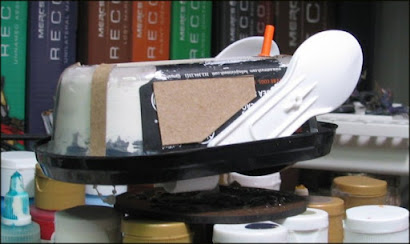 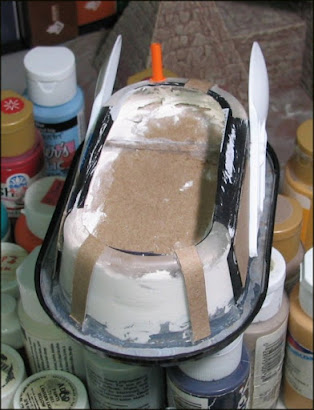 Here's the little write up I did for the entry:
Used on most industrial planets, the Vastra Class Maintenance Runabout is usually an unarmed open-top antigrav vehicle for moving small numbers of people to remote locations or within large facilities. The Vastra is easily piloted by beings with cybernetic interface capabilities but can also be piloted by non-cyborgs with various control options. There are countless variants throughout the galaxy, most notably the Vastra-J with a smaller crew compartment and a large flat cargo area.
The main body of the Vastra is a Mush cold oatmeal container with two spoons as "wings." The bowl of a plastic soup spoon serves as the main antigrav unit on the underbody. The two underbody thrusters are halves of a toothpaste tube lid. The dangly cables are a clothes price tag cable. Strips of thin cardboard were used as the panels on the main body. The antenna on the back is a pen needle cover. The flight stand is a length of hot glue stick with a magnet so the runabout can be stored more securely.  Another magnet is mounted inside the main body under the thin cardboard floor that was secured by some spackle and hot glue. 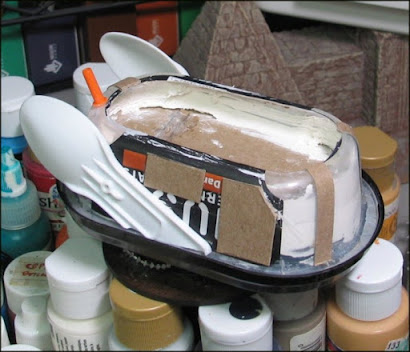 I couldn't think of a cool name for the design, but while brainstorming I was rewatching some old Doctor Who. It was some of the episodes with Madame Vastra, Jenny and Strax, so I decided that would be the naming convention.  This main design is the Vastra, the J (or Jenny) is the cargo version (I just started building one of these on the weekend), and the theoretical clunky armored version would be referred to as a Strax (or maybe "straxed up") 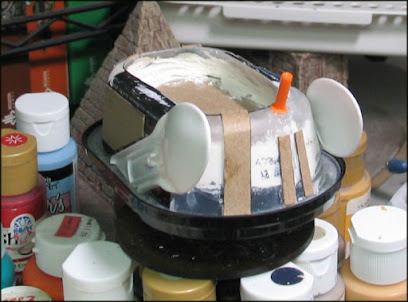 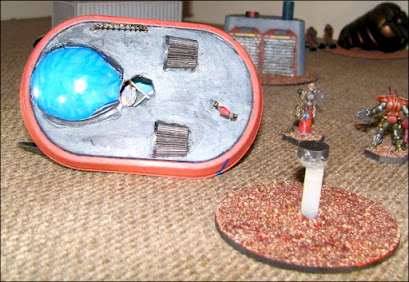 The design came about very organically.  There was basically no plan when I started, just seeing what junky bits I had and deciding "that might look cool on it" and then gluing stuff together.  For the flight base I thought an old length of glue stick and some fairly large magnets were cobbled together. Before I sealed the lid/bottom of the vehicle I hot glued another magnet into the hole in the bottom.  This helps give the Vastra the illusion of hovering. Metal miniatures placed in the front of the Vastra do tend to tilt it forward a bit, this is being addressed in the design of the upcoming 'Jenny' version. 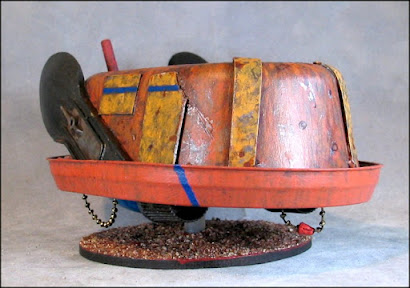 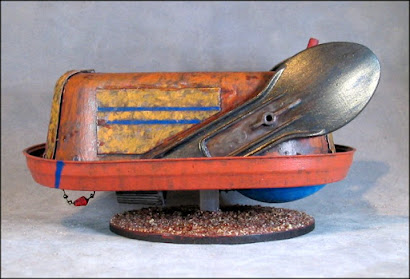 The paint scheme was just some dirty weathering. This is the first time I used some special tape to help on the the blue stripes. I will probably use it way too much on future projects. 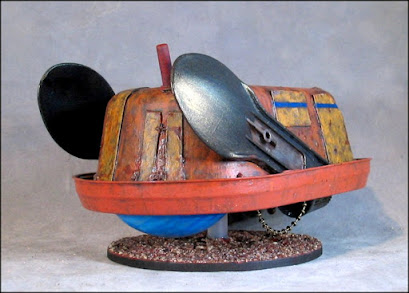 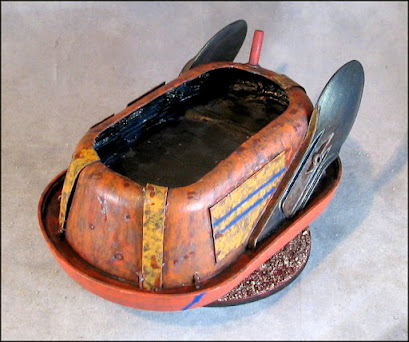 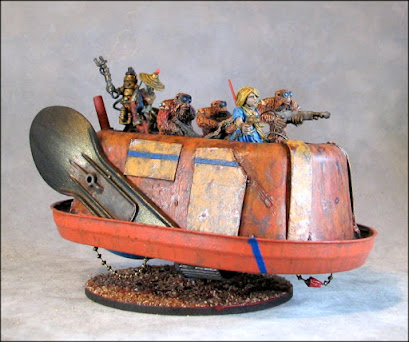 The crew compartment can comfortably hold 8 minis on 25mm bases. Here we've got the first three 'Fakaero' with the Wandering Techpriest and Apprentice. 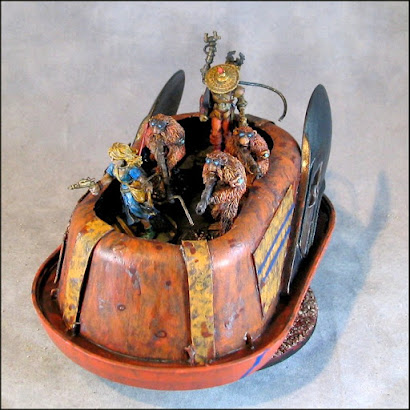 Here we've got members of my Mechanicus warband and some terrain to show the size of the Vastra in context of a gaming situation. 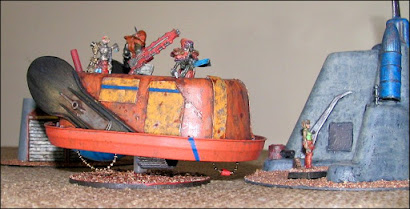