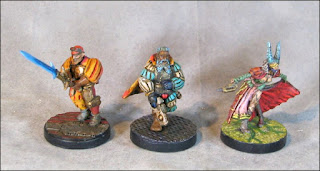 I'm not sure where the idea for an Inquisimunda sort of warband based around an opera singer or two came from. It's likely rooted in all the wonderful conversions out there using Mordheim and WFB Empire landsknecht figures to more of a sci-fi grimdark style. So it begins... 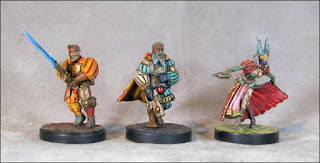 First up is Olav Tarantio, a rough powersword duelist, possibly an Imperial Guard veteran. Mainly bits from one of the old Warhammer Fantasy Empire kits, Olav has a head from Maxmini and a pistol and pouches from one of the Tau 40K kits. 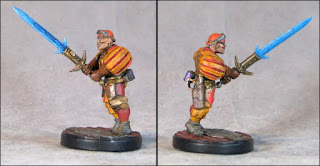 Olav acts as the Maestro's bodyguard. There's a simple coat of arms on the armor plate on his right leg.

Next up is Lady Ferramento, opera singer with a cybernetic lower jaw. The chin of the Wrath of Kings figure was a little odd so I bulked it up a little with some UV resin and painted it metallic. This made me think of Ladytron from the old Wildcats comic book and I thought it would be interesting to give her a plasma weapon in her cybernetic throat. She was originally armed witha flimsy double bladed sword in the right hand. I chopped that off and found a pistol in the Wargames Factory Shock Troopers kit that looked to fit appropriately.

Finally, the planned leader of this fancy warband, Maestro Dontique D'Arliens, opera singer and nobleman of some sort. This was another WFB Empire figure with a head removed and replaced with a Mordheim (probably) head. The right hand was removed and replaced with a Tau hand- don't look too closely, he's got the right amount of HUMAN fingers! The cape is from Victoria miniatures, I thought it would help make him lok more like a nobleman or operatic hero. Plus he's got blue hair...

Some comparison shots with the Governor and Madame Tashkent (and the lil' mutant guy) from Colony 87.

What's next for this warband? Well there are a couple of fancy lads with rifles that were earlier INQ28-type conversions that were only partially painted. They may be coming along soon to join the Maestro and his friends. There are some other possibilities that are only piles of bits at the moment, but I'm sure they'll come together eventually.