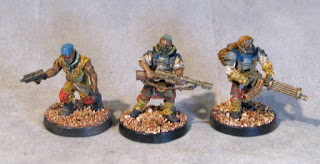 The kilted Highland Moss Guard troopers from Victoria Minis were some of the first figures I got along with some beastman. The beastmen were the first ones to have any painted,  but these two Highlanders were built first. Now they've been painted. Plus another Penal Trooper. 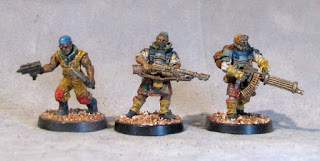 This guy was built and mostly painted when I realized he looked pretty weird with the big gun in his right hand (it was a short rifle but it looked really wrong held out so far from his body). I chopped off the hand and searched for an appropriate replacement. Heresy Miniatures' trenchcoat hangers come with many weapons with the hands attached and this little gun looked good at the end of his arm.

Here we've got all the completed Penal Troopers and their minders. 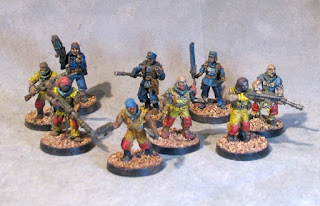 This guy was a pretty straightforward build with some pouches and just the standard lasgun. I used a GW bit on his right hip with a scope, so maybe he's a sniper. The tartan is very basic but gets the point across, I think.

THis heavy weapon guy went through some changes. First the ammo belt snapped when I was cleaning it, so that got simply glued back into place. 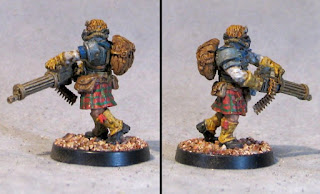 Originally his backpack was a big metal thing from an olde Necromunda figure. Eventually I decided it was too destabilizing (the Highlanders are resin so very light) and swapped it out for the current resin pack (not sure if it's from Victoria or Maxmini or somewhere else). Again, the tartan is passable especially froma distance.

Here we've got the latest Victoria miniatures mixed in with some previously painted examples. I've tried to keep them all with similar color schemes so they can work together without too much confusion on the tabletop.

Below we've got the Highlanders side by side with the recent Void plastic Junker conversions using Victoria arms and weapons. They look really good together.