I've had these guys in a baggie unassembled for years now. I think I picked them up from the Bombshell booth at GenCon because I just had to have them when I saw the pictures. I decided to snip their slotta tabs off and pin them to these 20mm round bases because they are so small it seemed the best option.

I left them unassembled so long because I couldn't figure out if I should paint them as "minions' or come up with a different color scheme (I tossed around the idea of using some color shifting paints on them but the 'homage' color scheme won out in the end).

The right arms all came separately so you could choose what weapon to give each Minion- another stumbling block because I wasn't sure how to best equip the little guys.

For the eyes, since their robots, I decided on a dark blue eyeball with a lighter 'iris' to help with the robot look.

This rocket launcher thingy makes this guy my favorite of the bunch.

This guy got a special upgrade of a red eye (it's for targetting or something?).

Here's the littlest guy who I knew had to have the biggest weapon. He's a very good shot. 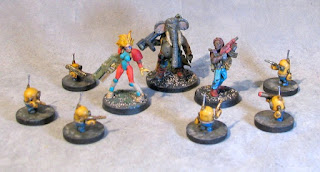 Some space adventurers find themselves surrounded by Minionbots!

When I set this up I couldn't help but think of the Benny Hill chase music. The Minionbots try to retrieve the anti-grav fishtank and its occupant.