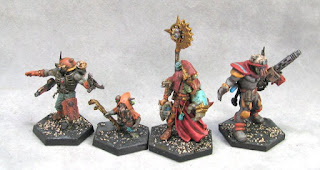 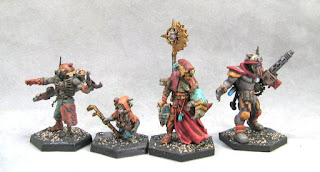 This first gun Servitor, Gangsta, was based on legs from Victoria Miniatures with various GW parts (Mechanicus bits and a Necron body) and a metal Reaper claw for the left hand. I wanted to do something different with his gun and eventually decided on a sort of silly under the arm position. His left cyber leg with the big shield on it was conceived of to show how imprecise Gangsta was when he first got the big clippers on his right arm. 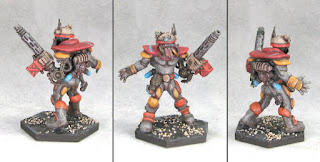 The second gun Servitor, Roadblock, is made from an old sci-fi football boardgame figure. His head and left arm were removed and replaced with GW Mechanicus bits. He's also got a Mechanicus backpack. It's a pretty simple conversion but I really like how he came out.

This lil' guy is an old Warzone Child of Ilian with a simple headswap to make an assistant for the Techpriest, Binky. I've got several Children of Ilian that I really want to do something similar with now but I need more of the Skitarii heads and the minis need to be stripped of their old late 90s paintjobs. Maybe someday. 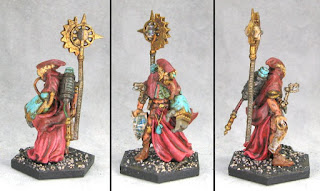 The Techpriest, Crabtree, is based on a Reaper Bones Wizard with GW and other bits (guitarstrings and twisted wire).  I love the '50s aqua blue color for a retro-futuristic look on his power glove. His power axe/toolwas formed with a length of metal cable from Dragonforge with some GW bit with the skull in it and the axe teeth are from a resin cog set. It's not as detailed as I would have liked but it looks good. 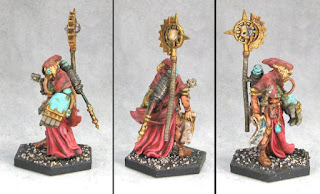 Here's a closer look at the ancient technical secrets on his scroll- I'm not responsible for any attempts to make whatever these instructions are for. 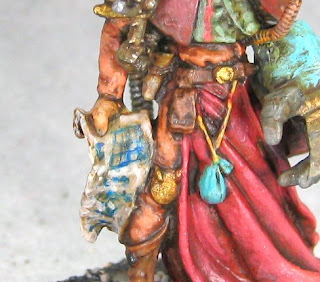 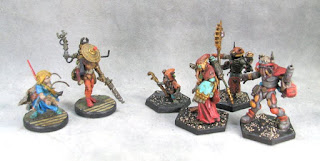