A mixed bag of techno-themed miniatures this time with a couple of updated and rebased Colony87 figures thrown in.

First up is a clockwork owl from Crocodile Games. He's based on a 20mm round with a big rusty cog so he's not so lonely. 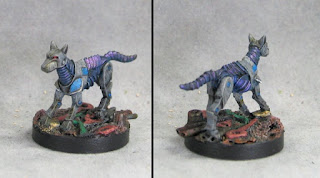 Next is another Crocodile Games Olympus mini, my second completed automaton dog. This one got a junky base from some failed UV resin base toppers  and other bits. 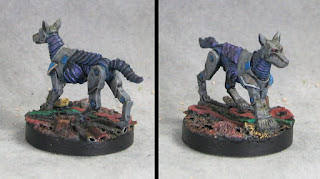 And here is the newest automaton dog with my original version. 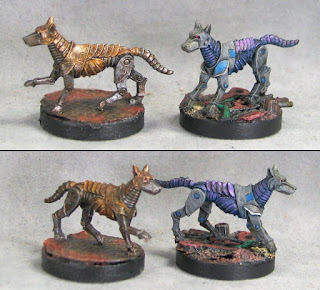 From Black Crab Studios 2nd Kickstarter we have "Grumppa and Lil1 with a Mekotozoa pet." These delightfully creepy miniatures just needed some tech bits added even though they're perfect as they come. The Lil1 comes without a right arm so I knew during the Kickstarter that I needed to find some tiny robot arm to add. For Grumppa I originally thought I'd leave him as is but convinced myself to give him an optical implant and also a little GW plastic pouch bit on his back. 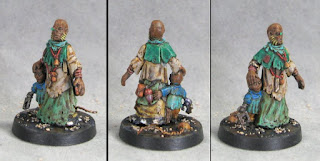 For the Mekotozoa pet, I used a nail art stud and a twisted length of some very thin wire for the tail. As a fan of Farscape I've wanted to have something to represent DRDs on the tabletop forever. When the figures were almost done I realized I could make something that was not-quite-a-DRD with the nail art thing. So the Mekotozoa was brought into existence. It also kinda looks like a variation on a Cybermat from Doctor Who. There will be more of these eventually... 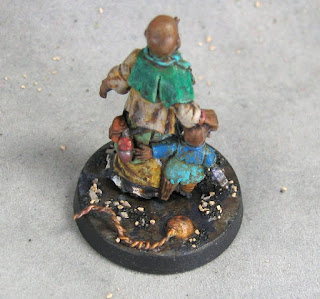 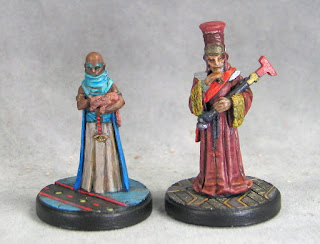 Finally we have a couple of Colony 87 minis (from the 2nd Kickstarter) who have been rebased and touched up a bit. The original version and basing can be seen HERE. Their bases were cool but I grew to dislike them because they were a little smaller than 25mm. I finally decided to move them onto regular 25mm sci-fi bases (from the Sedition Wars box) and fancy up their paintjobs. 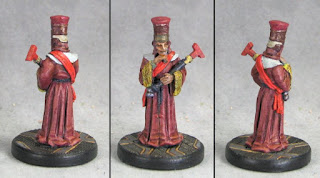 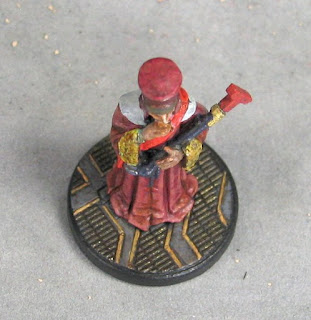 Sanford the "Space Wizard' got a nice stylish space grate base and it's clearer that the left side of his face is much paler than the right- he was in some sort of horrible accident and bears the scars to this day. 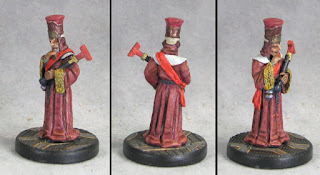 Oracalla the "Space Priestess" got one of the spaceship hallway bases with tiles and floor-based lighting. Her space cat and cloak pop a lot more than the original look of them. In these pictures you can see a little area of the base behind and under her that is not visible in person. I'm going to have to fix that, though. 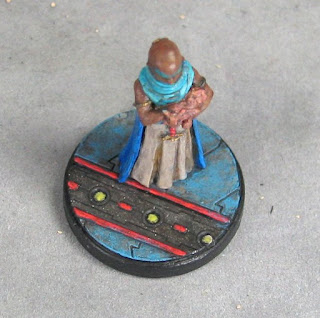 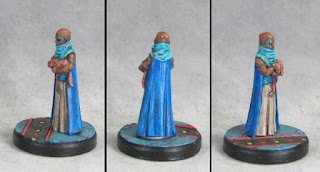