You can never have too many humanoid robots with guns on the tabletop. With that in mind we've got three cyborgs or droids or 'bots (it's really up to what role they best fit for the setting). Instead of giving them the common asphalt flocking I would normally use for figures like these I went with dark grey and bright green markings on the floor. The markings are some vague spaceport landing pad directions or something like that. 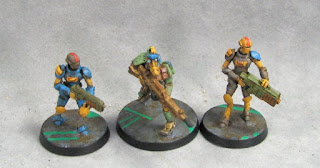 The first of two Security Bots from Antenociti's Workshop, this guy has a small blaster and has more blue parts. 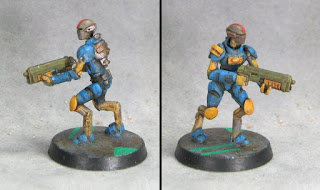 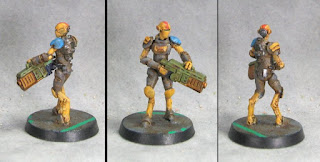 The second of the Antenociti Security Bots has something that looks like a heavy weapon (at least compared to the blue guy's blaster). This one has more yellowish parts because I really like how this darker yellow looks. 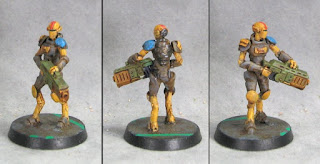 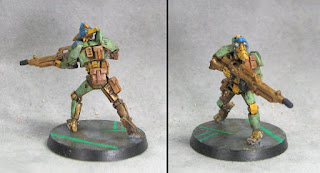 And this big guy is from the Rogue Stars line of minis. He's got a bit of blue and yellow to tie in with the other two. He came on an integral base (NOOOO!) so I had to chop it off and then pin him to this more standard base- sadly, when removing him from the poster tack I use on my painting handle (just an empty prescription bottle) he came off because of the tiny connection points and my clumsiness. I got him back on with some super glue and baking soda that should hopefully hold him for a good long time and you can barely see where I had to paint the areas around his feet to cover up the damage. 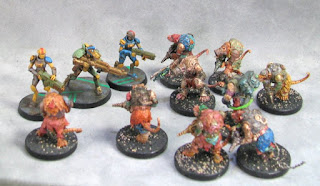 Above we have all three droids wading into a pack of  Space Ratmen (Veermyn from Mantic). Below is a scale comparison lineup with a Monkey Miniatures figure (basically normalish human sized in 28mm) and a GW Primaris Marine (big post-human genetically augmented power armored guy).