For October I hope to have weekly updates of scary minis (or just minis that are finished!) to help set the Halloween mood, or something like that.

First up is a freaking massive Hareball from Fortress Figures. I don't think any of these were actually released, but my awesome secret contacts (thanks Roe!) smuggled one to me at GenCon in August. This guy is metal and just under 2" tall from the base to the tip of his ears. I decided to put him on a 50x50mm base so he could act as Titan Master in my non-traditional Titan Warband for WarGods of Olympus. There are some smaller Hareballs that will serve as his unit of Titan Slaves- I'm thinking of going with themed units for the Warband so this will make for a good start...

This guy is not as tall as the actual Crocodile Games Titan Masters, but he is very large compared to a standard 28mm human, as you can see here facing off against a WarGods Spartan Captain. 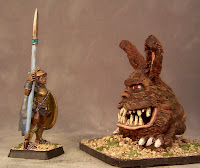 And here he is up against a Sebeki Warrior.

I have no idea what scary miniature will be coming up next time, but it will be a miniature of some kind.
Labels: Horrible Halloween minismith commentary monsters