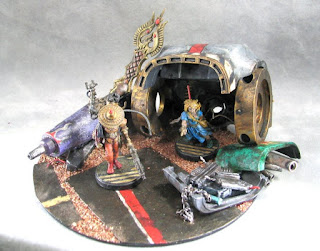 The potentially sprawling Tech Bazaar Project has another new piece finished and an updated older piece in this installment.

First, the updated tech shed, made out of a Brookstone cottage cheese container before the recent earthshattering innovation with that piece of trash. I realized it needed something on the curved blank back wall. While the Scrapyard base was was drying I made a quick maskto get the general shape for whatever this symbol is (it's pretty close to the one on the Cetofin Tank piece from last time). Then I used the leftover dirty wash from the Scrapyard base to dirty up the relatively clean tech shed. 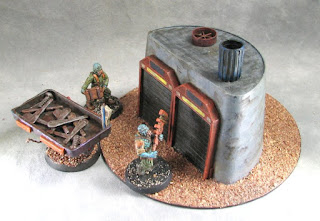 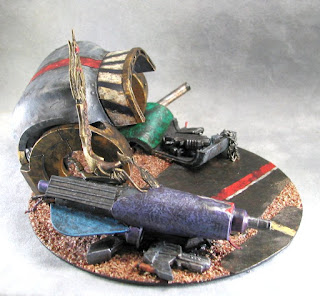 The first of an unknown number of scrapyard bases came together pretty quickly this week. I knew I wanted the mech body and tray of engines on the base from the start. First I was looking at adding a  couple of tables with techy bits on them. But when my cheap bullet pen ran out of ink and had troubles with the open and close action I decided to honor its years of service. 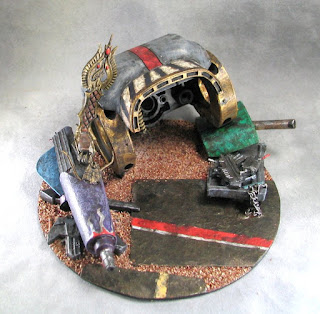 The bullet pen looked like it might be a good front to a jetbike. I had been looking for a thing to use the Phoenix throne bit on and a jetbike seemed like an awesome use. Some plasticard wings and guitar string finished out the main design. It was a little plain looking so I got another plastic bit to be a 'windshield' it covered some of the plainness in front of the seat. The intake thing under the wing is a pen needle cap that was trimmed to fit snugly. 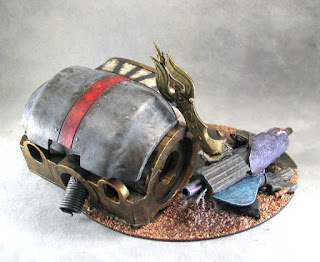 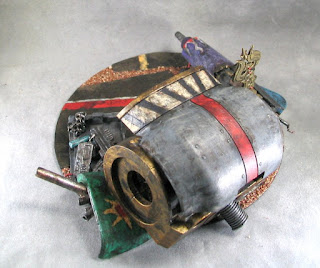 The mech body needed to have stripes on the collar- and it was so satisfying to remove the tape. I had planned on adding more hanging cables to the inside but realized it would limit the space to add miniatures inside the cavity for cover. 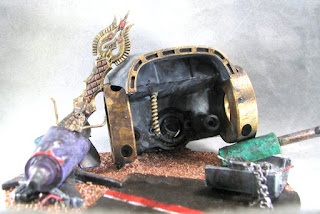 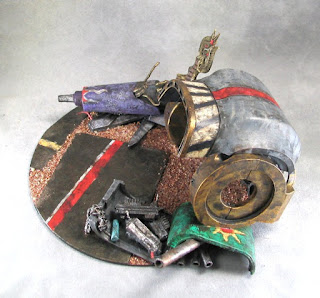 The shoulder pad and 'tray' are both pill organizer lids. The original plan was that these would both be parts of the mech so the needed to match it. Once I remembered that this was meant to be a scrapyard I felt good about using totally different colors for all three. On the shoulder pad I couldn't decide on a number or a symbol so I settled on a star sort of design. 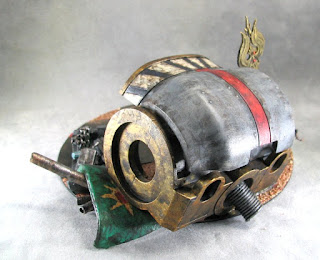 The engines in the upside down shoulder pad are action figure sized pistols with the grips removed and some wires pinned in. There's also a length of plastic rod to add a little variety to the stock. 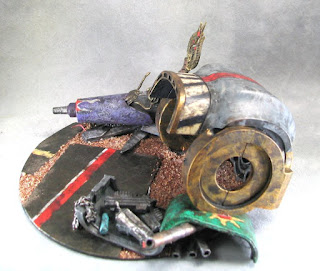 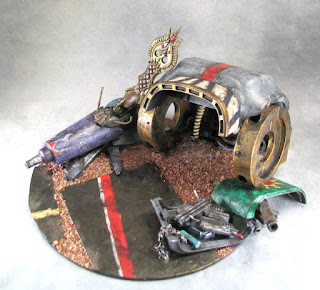 The metal plates on the ground are something I want to have throughout the tech bazaar.  I think it will make the ground look more exciting when mixed with the 'Martian Desert' sand. 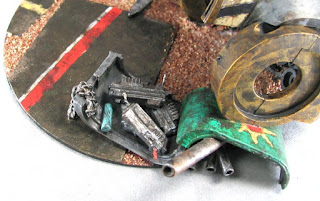 Let's have some nice detail shots of the more interesting details.... 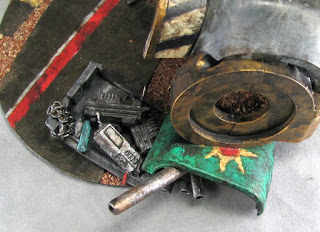 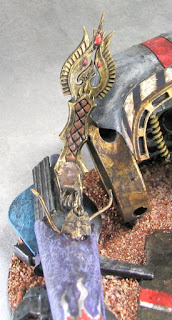 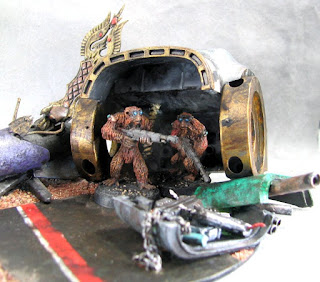 And a wrap up with some 28mm minis hanging about. Above are a couple of the Fakaero stalking through the scrapyard. Below, the Wandering Techpriest smiles to himself at memories of his old jetbike from when he was a kid. 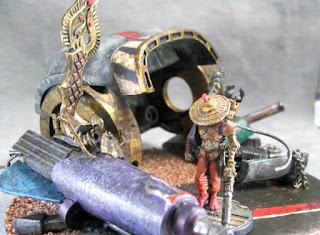