What the heck is a Broamiik? Well it's an alien race from a million years ago in a sci-fi RPG campaign that I always wanted to find/make a mini for. They're sort of tapir/elephant centaur things who once had a far-flung galactic empire but now are reduced to two slightly antagonistic systems- it's  a bit more involved than that, but their history is not really relevant to the matter at hand.

Nobody makes elephanty cantaur minis that are close to what we had in mind when the Broamiik were conceived of. The closest thing we could find was the original Tyranid Gaunts but they're way too biotech looking. The Broamiik are meant to have pretty high tech technology and a pretty stable culture. But back in the olden days we just used the metal gaunts as stand-ins.

My recent plastic fetish has  brought me back to the box of plastic Gaunts I got several years ago to use for an attempted Broamiik conversion. Well now it's underway... 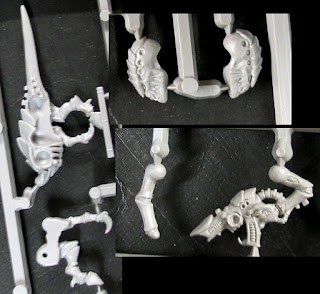 I decided to go with a pretty static pose for this first one. I first set about trimming most of the spiky bits because these guys are supposed to be evolved from herbivores from the grasslands of their homeworld. 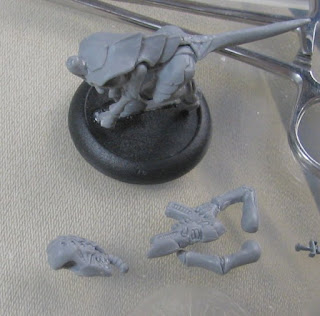 I had no idea what I was going to use for the short trunk until I was trimming one of the bio-cable things from the rifle. It was pretty much exactly what the trunks I had drawn in the distant past looked like and it was pretty much the right length too! I pinned the trunk to the nose area because it was pretty clear that superglue would not be able to hold it there securely. 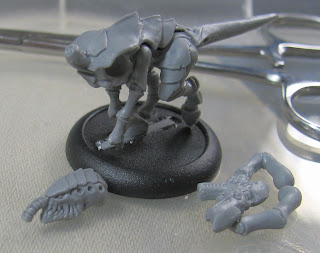 The pics don't quite show the middle legs' claws have been trimmed down into more hoof-like shapes. 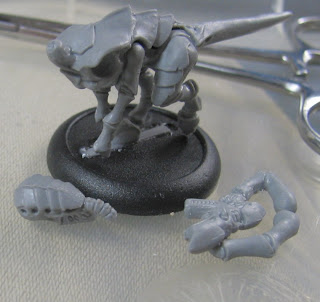 The next steps will involve filling in the big holes in the side of his head and near the tail. Also the exposed teeth are not very Broamiik, so I'm gonna try to sculpt some lips over them. There's also some other gaps to fill here and there and then some pouches for gear to be added.

I'm almost as excited about this as I was when the Wargames Factory Amazons arrived...
Labels: conversions minismith commentary sci-fi minis WIPs