After playing the Isle of the Cyclops scenario Thursday, and not having any rocky outcrop-type terrain, I realized that most of my terrain is building related - there’s not really any natural terrain. I cut my own foam trays for minis transport and always end up with some odd shaped/too small pieces of foam that aren’t good for much. If only these two dilemmas could solve each other. That’s what this Lame Terrain Project is all about. I have no idea if it will work but I’m going to give it a try.

I started out with a few of the odd pieces of foam and three CDs for bases. I cut the foam with some scissors from various angles to try and get ‘natural’ rock-like shapes.

This first one has a tall chunk, a medium chunk, and a little chunk. I’ve placed them to allow room for one model to pass through a gap so monsters and units will have to go around.

The second one is a variation on the first. Three chunks, this time all about the same size. They’re grouped together to allow one model to easily pass through while forcing anything with larger than a 20mm base to go around. 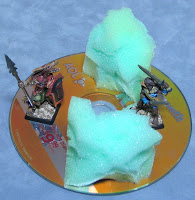 The third one only has two similar sized chunks. It’s also designed to make it hard for anything bigger than a lone man-sized model to get through.

Each CD has had the hole covered with some thin clear plastic. I used some crafter’s glue and let it dry for 24 hours or so. I think as long as rough handling is avoided the ‘rocks’ should stay attached (depending on how the painting goes and what that does to the whole piece). Painting should be interesting since the foam chunks are kind of like sponges. This could turn out to be brilliant or a total waste. Wish me luck!

Special thanks to the Typhon and Heru for posing with the unfinished rocks, they really give a sense of how a battle among these outcroppings will look.
Labels: Lame Terrain WarGods WIPs