I've been working on this guy off and on since early this year. At first I was a little bummed that he wasn't the other sculpt (with the big stone block chained to his right arm) so that contributed to slow painting and indecision. But over the months of doing a little bit here and there he began to grow on me.

A week or so ago I finally decided that I was gonna finish him off so that he'd at least make room on the painting table for a half a dozen more minis. I decided on the black skin and reddish hair way back when I started him. Sort of like some Greek pottery art bulls.

It wasn't until I was focusing on details that I decided to give him a tattoo of the Apis heiroglyph. I know he's from Greece, but he likes the exotic Ægyptian culture and identifies with the Apis Bull. When I was almost finished with all the painting, I decided to give him the warpaint around the eyes and on the horn. Also probably not terribly Greek, but YOU tell him that!

Here's Apis with a Typhon spearman on one of the recently completed pillar bases. And on a foam rock base with a Satyr- "C'mon lil' buddy!" I've come to really like this sculpt and can't wait to see the rules coming out for him.... 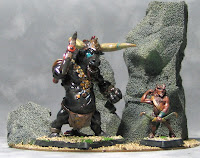