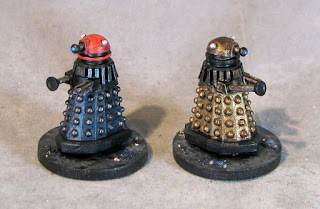 Back with two more Dalek Outlaws (I've decided to call them Outlaws instead of Renegades now) to ravage the universe. They're both in paint schemes reminiscent of official colors but they're not exact replicas. I like it that way. 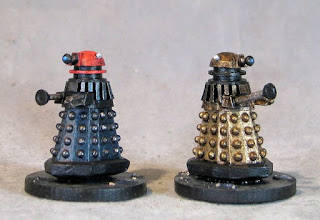 First up our gold Dalek, PB3319, with a little battle damage due to some annoying mold lines. The main problem area was on the back orbs where some mold lines ran through several of the orbs. I decided to simply snip all of them off of the back section and smooth it out a bit with the intent of making it look like some kind of battle damage.

There is also a little bit of a mold line on the back of the dome that I cleaned up pretty well, but I can still see it, so that's some more battle damage. 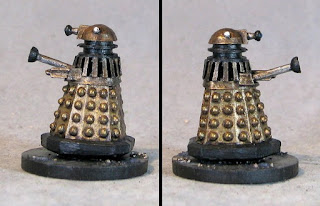 And then there's KA9270 who got some simple conversion work done. His plunger was snipped off and pinned back shorter because the Daleks don't always go around with the plunger fully extended- plus it lends some more individualism to the model.

Something that seems to be much more pronounced with these two than with our first Outlaw is the hovering effect. As part of the removal of their integral bases I had the option of making it totally flat or leving a slightly rounded area under the base. I've opted for the more rounded choice to give a slight illusion of them hovering. It also helps their individuality because one can be tilted a little this way while another is tilted that way. they're Outlaws so they don't need to conform! 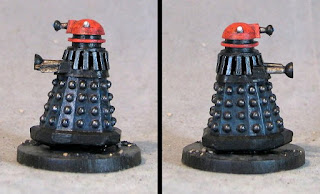 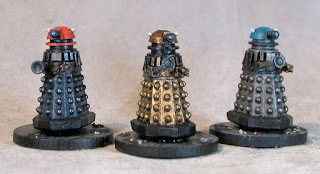 Here we can see the current crop of Dalek Outlaws ready to do whatever Dalek Outlaws do. There are 3 more to paint, but I'm going to take a break from them to focus on some stuff that's been sitting onthe painting table for quite awhile. Plus there's a Davros figure left as well, that should be fun. 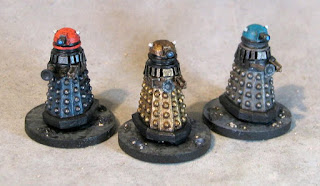