The first criminals are ready to fight! A while back I ordered the Victoria Miniatures Penal Guard unit. These first three have been built and primed for months. My current focus on getting some of my Victoria miniatures that were already built painted so I can build more of them in good conscience to help clear off the painting table (an impossible task!). 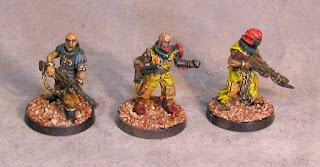 Since they're Penal troops I decided to choose yellow for their prison uniforms because I havent really seen that from anyone else. I think it turned out well, but the next batch might get different knee-pad colors than the darker brownish yellow I used on these. I also decided to do some slight conversions on the middel one and he one on the right because I like to make even basic troopers into characters to add to the diversity of minis in a unit. 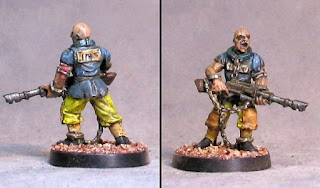 First up is a pretty straightforward build I've dubbed "Bulldog." I decided to leave him with a blue trooper jacket that he maybe was allowed to keep or he scavenged from the battlefield. 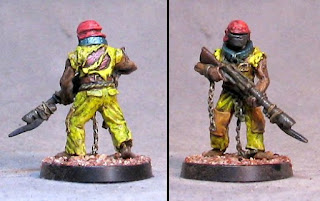 "Cobra" has a head from the Void 1.1 plastic Convict Legionnaires (fitting) to help give him a mysterious battle hardened look.

Finally, "Byrne" got a metal beastman shotgun arm and a plastic arm from a Mantic robot. He was probably a space pirate because just look at him...

A look at the rest of the built but unpainted Victoria Miniatures I hope to complete by the end of the year. From left to right: A metal beastman with a resin AK from Victoria Minis and a resin pack from Maxmini (this guy is going to be named Krampus because it seems fitting); "Col. Warden" one of the custodians for the Penal Troopers; the other custodian of the Penal Troopers with a plasma rifle; heavy weapon Highland Guard with an old GW metal backpack (this might get swapped before he's done); Highland Guard trooper (the first Victoria miniature I put together a couple years ago); and, a female Trooper with an AK.
Labels: conversions sci-fi minis Victoria Miniatures WIPs