From one of the Reaper Bones Kickstarters, the Pathfinder dragon has sat based and barely started for over a year... 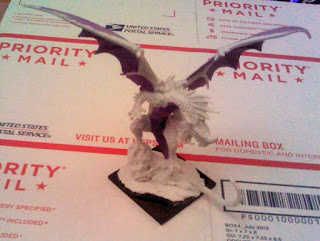 Then a couple of weeks ago I got the idea to add convert something bigger for the Dysprosian Brotherhood (wandering cyborg adventurer warband). What would be a cool cyborg? How about that dragon that didn't really hold my painting interest? 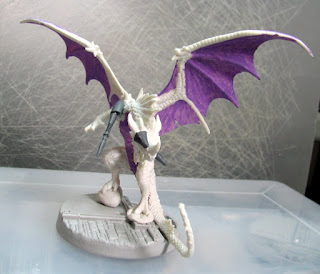 So I started looking at bits and searching for pictures of other similar conversions online. I didn't find anything that really helped. Finally I just decided to start hacking away and see what came out. 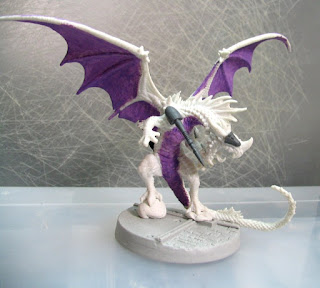 First up I thought of an eye implant, and maybe chopping off an arm to add a metal one (I didn't have a good replacement so that idea went a different direction). And a shoulder mounted gun! That would be cool.

After looking at how to possibly mount a gun on his shoulder, I came to the conclusion that I should use some of those little magnets I got a while back. Then I could have an optional gun to swap back and forth. Then came a lot of searching YouTube for magnetizing videos until I felt comfortable enough to start drilling. It was much easier than I expected and now I'm afraid I might start going overboard with magnets... 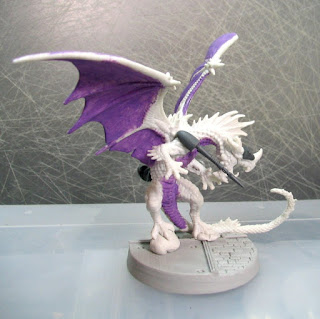 On his back I decided some sort of power pack or generator thing would be needed. After the magnetized guns were decided on, I realized he needed someplace to keep the extra gun while not in use, so the little node on his right hip was found in my bits to get a magnet too. 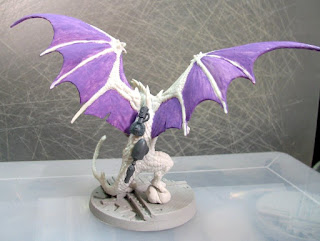 The left arm is going to be the 'cybernetic' arm, so I added a couple of modified shoulder pads and a bit of guitar string on the inside forearm to help give a more cybernetic look. 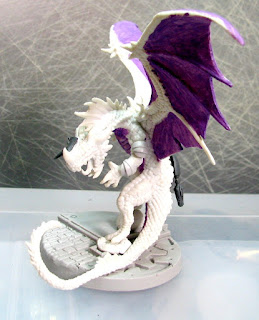 I haven't decided on the base yet, but if I go with this base there will be a damaged robot or something under his right foot. I've not convinced myself that I'm done with cyber-enhancements yet. Maybe something in the wings? The tip of his tail? I don't want to let the converting get too out of control.
Labels: conversions dragons Dysprosian Brotherhood minismith commentary Reaper Bones sci-fi minis WIPs