NOTE- The little splash of aqua on the otherwise orange blaster arm was well hidden and only noticed after these pictures were taken- this is being addressed now. One picture was digitally altered to hide this goof but it becamne clear it would be easier to leave it alone in the other pics. 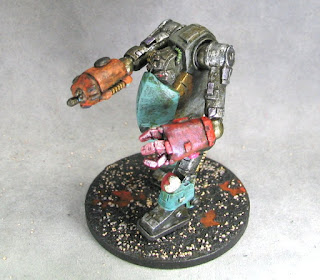 This fella is a heavy chunk of metal from Oathsworn Miniatures Kickstarter from 5 years ago. I picked up three of them and promptly stored them away in a box because it was daunting to think of pinning the arms and legs of one of these delightful monsters and get it mounted on a base (I went with a 50mm because it seemed most stable). 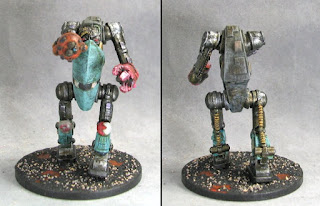 I was tempted to go with an olde over-the-top Rogue Trader Era robot paintscheme but decided to use metals greys and aqua for most of it. The powerfist got some red undercoats  and then some red metallic color shifting paint. 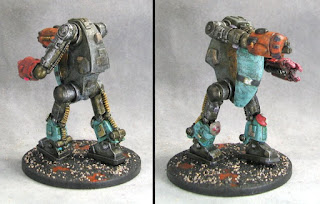 The blaster was going to be red too but I decided to go with oranges to make each hand stand out. On the chest I wanted to have some checker pattern and taped off a very simple stripe that I think turned out okay. 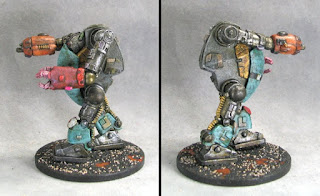 There are two more of these behemoths that will eventually be finished. I doubt they'll all match color schemes, but that's how I like it. 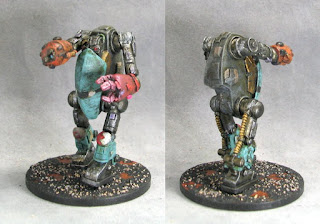 Here's the Warbot "2" with a selection of other bots in a lineup. From left to right- Diehard Miniatures Killbot, Oathsworn Warbot, Antenocit's Workshop Female Robot, and though he's not a robot the converted Heroclix fogure for Sir Brother Targus. 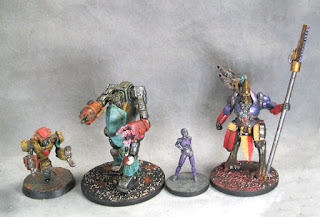 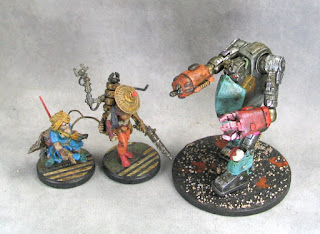 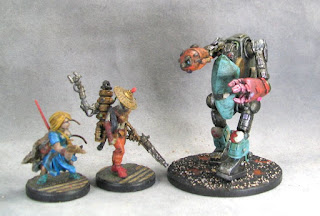