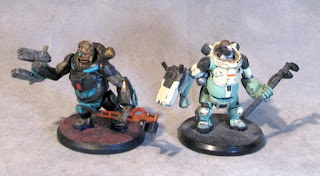 I've had a few of these prepainted AT43 Karmans for quite a long time withthe intention of repainting them. On the left is the first one I've actually done with a similar figure on the right in it's prepainted state from the factory. Not that I dislike the way the prepaints look, it's just I'd like to paint up my own gorilla in power armor because it's just a cool concept. 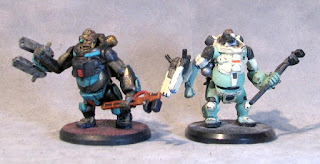 I didn't bother stripping this guy of the original paint, just a light primer over it after some mold line cleanup. There are a half dozen or so more Karmans that I will eventually get to and I think each one might get different color armor.

This guy's techy monocle came out really good. I think it was more the different greens I used with an old Partha Paint fluorescent green on top that makes it look so good. The cable thing on his huge wrench is a bright red color, but it's really lost next to the rusty orange of the wrench itself. For the base, I left him on the 40mm textured base and just drybrushed some greys and pinks because I wasn't sure what type of environment to put him in.

The Karman figures are BIG, so it's worth some size comparison shots. Above we have him next to the Hasslefree Space Girl and a GW Primaris Marine.

Above is a Heresy Miniatures Trenchcoat Ganger conversion and a Victoria Miniatures Highland Guardsman.

Above we've got the Karman with the Wandering Tech Priest and Apprentice conversions (GW Mordheim Youngblood and a Rezolution Fist). 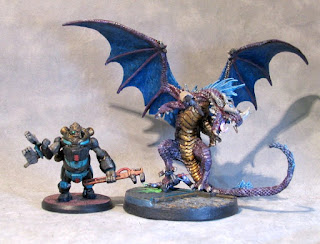 Finally, here we see the Karman with the Cyber Dragon conversion o a Reaper Bones figure. These two would probably get along well...
Labels: scale comparisons sci-fi minis Space Gorillas