It took long enough for me to get something for myself painted up since the beginning of the year. Hopefully a Painting Frenzy will soon be invoked and I'll have lots of pics to put up. 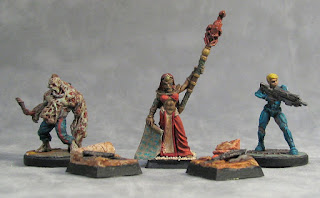 First up are two more Black Quill objective markers for WarGods. After the first one was made (far left in the bottom pic) I knew I needed more and that I needed to come up with a campaign to use them all in. The campaign is being worked on slowly and more Kekooee Seshket bases are being planned. 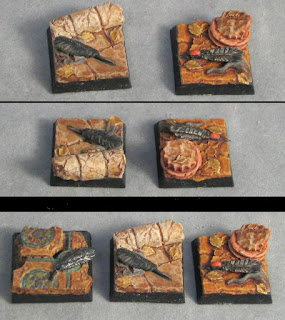 Speaking of WarGods, this Scorpion-themed City Dweller of Tanis Mistress of Words conversion has finally been finished! There's a rough place on her dress near the scroll that looks horrible in the pictures- in real life that area barely looks off at all. Despite that blemish she is pretty wonderful. 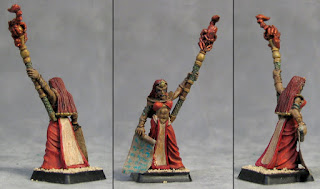 The Typhon/Asar-themed "Secret Warband Project" is one step closer to completion now.... 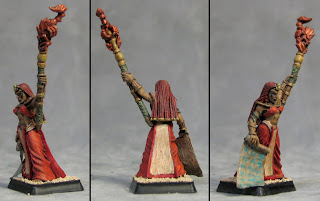 A couple weeks ago my 'Battle For Alabaster'  box arrived. I put together a few of the figs and primed them but didn't get a chance to finish any off until now. I'm surprised I haven't seen more people posting their first painted figs from the box. Im also surprised that most of the Vanguard Troopers seem to have the not-quite-Stormtrooper colors of the studio paintings.

First up, helmetless Vanguard female Trooper "21." I'm planning to do maybe 3 groups of armor colors for the troopers. This aquaish is the first one. Her right eye gave me way too much trouble so I decided she'd have a targeter monocle on there. Looks good and I didn't have to go crazy. 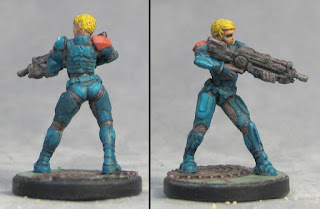 And finally, the first nano-zombie Strain guy (when I had food poisoning earlier this week I felt like he looks). I love disgusting monsters like this. The Strain overall will likely be the first fully painted figs from the box. Right now I don't think there are any of the figures that I don't like the poses of. Although I'm going to do some slight conversions after the first few figures are complete. 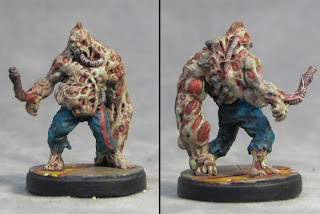 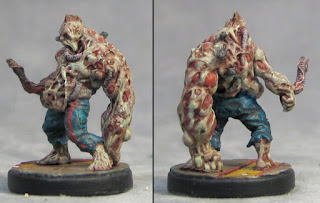