Those brave souls who took part in the Akhenaton Heresy WarGods World Campaign Finale at GenCon 2009 got to keep one of the "Priest of Aten Revealed" miniatures.

A little background- the Atenist warbands had Priests of the new heretic god Aten. These mysterious figures were believed to be normal humans but during the big fight at GenCon their true form was revealed. I think it was after the Old Gods' 'surgical strike team' (a Typhon Assassin, an Anubi Embalmer, and someone else I forgot because it was a long time ago- sorry) destroyed the Ark of Aten. Tons of snakes poured out of it and formed a giant writhing snake monster the Firstborn of the S'syth/Apohpis. The Priests of Aten were revealed to be S'syth agents with serpent heads.

Alex Bates, the biggest WarGods fan in Alaska, has often lamented that he didn't get one of these specially converted miniatures. He's a hardcore collector of Crocodile Games' miniatures and has at least one of almost everything released and unreleased-- except for the Priest of Aten Revealed figure that only a handful of folks have. So I taunt Alex from afar with pictures of mine from time to time. 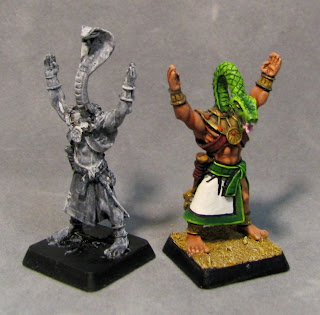 I decided to put my considerable conversion skills towards pacifying Alex. The result is a totally unique version of the Priest of Aten Revealed. Sure he's got a cobra head instead of the slithery generic snake head, but that just makes him even cooler. 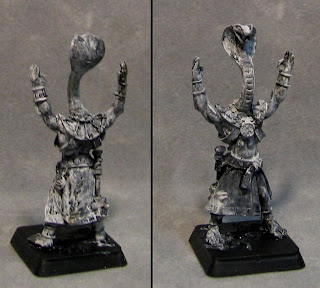 Chris Fitzpatrick gave me a few of the cobra heads a couple of years ago to use as I would. He cast them up for his own personal use for terrain projects and stuff. I, however, have used them in a few conversions to make a cobra-headed lion, a cobra-headed mummy, some other cobra-headed thing, and this Priest of Aten Revealed. I have 3 left because I sent one to Alex along with the mini. 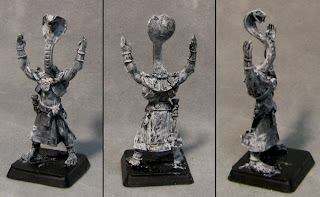 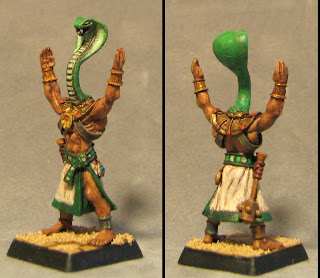 For the paint scheme I went with a slightly more fancy version of the original (most of the originals were finished the night before the big game). The main thing is the alternating colors on his belt. 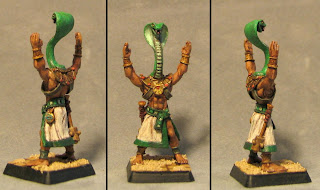 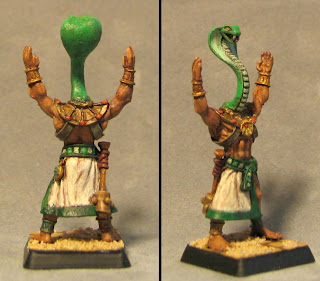 I think he turned out pretty good and I hope Alex likes him and will use him with a smile, knowing that his is the rarest of all.... 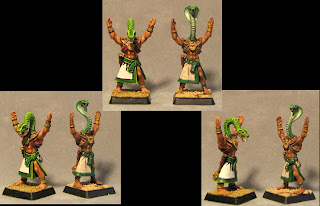 I shall avoid the temptation to do up another of these- it'll at least have a different priest body if I do.
Labels: Alex Bates conversions GenCon minismith commentary WarGods WIPs