Most of the following miniatures were painted before GenCon, I just didn't get all the pictures together until after that.
This first one is a Rezolution Hacker chick from the GenCon Paint and Take.

I try to hit the Paint and Take every GenCon. The last few years it has been stupidly crowded and the Paint Minions who are there early in the morning have a few jerks in their ranks (maybe they just didn't get enough sleep, but try to not be a

Next up is my entry in the GenCon painting contest. I'd finished the conversion a few months ago but painting on him stalled until the week before GenCon. It's a Crocodile Games Sebeki warrior converted into "Crocodiliopolis Jones" a special character with no official stats that I made up as a joke some time ago.

The main thing was the conversion. Since the conversion was done I figured a quick paintjob would mean a cool entry for the Crocodile Games Conversion part of the painting contest. He got Third so it was worth it- and now he's painted and ready to be used as needed...

From West Wind's 'Lucifer's War' line of miniatures, these are the Scions of Woe Archers. I've never seen the Lucifer's War rules and fluff, but I presume these guys are lost/damned souls fighting on the side of some dark angel. My plans for them are for use in WarGods of Ægyptus as either Death Cultists (the outfit with the skull "helmet" is just right and I don't have to massively convert some actual WarGods minis) or as poor Asar City Dwellers of Tanis (slaves of the evel Typhon children of Set) because they could easily fit that role as well. 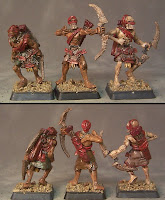 They came in a blister pack of 20 for about $12 (!!!) from Noble Knight. I figured that was a great deal even if they turned out to be really bad sculpts. They aren't awesomely sculpted but they look good for my purposes. There is a pack of Scions of Woe with hand weapons that I would love to see- if they're even close to the same look as these archers I'll probably have to get some... 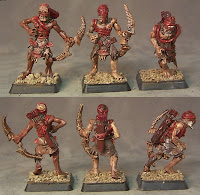 To add a unit of Death Cultists to my WarGods Golden Fleece Campaign warband I decided to finish up the rest of the unit. Since they're not undead I decided to give them a more uniform look than the random color schemes I use for mummies (because I think it would be rare for a unit of reanimated warriors to have a uniform look, the Necromancer is not looking for regimental order when he raids a grave here and a grave there so most of my mummies and undead in general have different colors from each other). Working off of the original 3 I assembly-lined the next 7 to finish out the unit 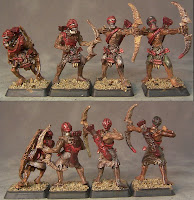 And here are the first 10 Scions of Woe together as a unit. They act as Death Cultists OR Slave Archers for a hypothetical Typhon warband.

Finally a WiP of the Crocodile Games Sebeki Conventioneer miniature released at GenCon 2010. I've obscured what it says on the back of the 'Saur Wars' t-shirt because it's meant as a surprise for the great Alex Bates who is working on the Saur Wars project.  I switched the head for an open mouthed version so I could give him a KaBerry freeze stained tongue. His bag of goodies may end up with zebra stripes and I'm still not sure if I should go with more natural scale colors or make him an albino... 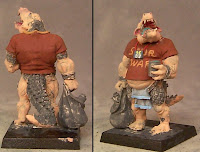 There are some other WiP figures that I hope to have finished soon. This Sebeki is near the top of that list.
Labels: GenCon minismith commentary sci-fi minis WarGods WIPs